The Best Modern Home Builders in the US

First popularized during the decades between the 1920s and the 1970s, modern homes are often characterized by their flat roofs, minimal designs, and large glass walls. This architectural style was born in response to the over-the-top architecture of previous decades: modernist architects preferred simplicity. Homes with strong horizontal composition, large open floor plans, and cinematic asymmetry gradually became far more prevalent. Today, these homes can also be crafted with sustainable building practices and are often more energy-efficient.

We’ve compiled 50 contractors throughout the entire country, representing the best modern home builders in each state. These contractors were chosen based on merit, work history, affiliations, and previous projects. Several of these firms offer unique services and incorporate innovative solutions into their designs that they offer exclusively.

Philip Woods Home Builder has been in the industry since 1993 and has secured a solid reputation for itself for its extensive range of services and designs. It maintains affiliations with organizations such as the National Association of Home Builders (NAHB), Alabama’s local Home Builders Association (HBA), and the Greater Birmingham Association of Home Builders. Its portfolio displays a variety of different homes, most of which feature modern takes on otherwise classic themes. That approach might be best observed in its minimalist Mediterranean projects. With features in publications such as Veranda, Birmingham Home & Garden, Milieu, its work is often distinguished by its use of large floor-to-ceiling windows, neutral color palettes, and the incorporation of industrial elements and straight lines. Take a good look at the chosen project below, for instance. Inside, this home features seamless paneled cabinetry, sleek furniture, and a large wall-like fireplace. Its master bedroom is a minimalist haven. This home also features numerous nooks perfect for entertainment. One noteworthy space includes a small area where one of its glass walls meet, creating a perfect area for its homeowner’s grand piano.

Headquartered in Anchorage, Hawkinson Construction specializes in luxury home construction and has been in business since 1968. The firm is family-owned and, in addition to its residential work, ventures into the commercial industry from time to time. The firm is comprised of a team of highly-skilled, experienced professionals and also takes on large-scale remodeling projects. Its process emphasizes the importance of maintaining open lines of communication with its clients. The firm also assists with working on budgets and commits itself to ensure that its client’s lifestyles and needs are reflected in their new homes. The firm’s portfolio depicts a variety of several modern homes, all crafted with the unique Alaskan environment in mind. 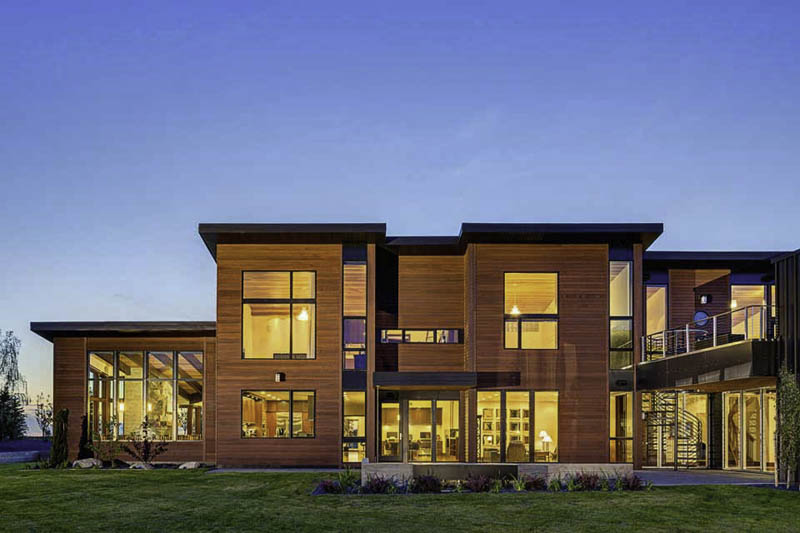 For the home we’re featuring here, the firm’s team made use of large floor-to-ceiling windows and entryways coupled with a wooden exterior. The firm also opted for a recurring theme of straight lines, something that will be a commonality for almost every project on this list, as well as a flat roof. Several unique fixtures were also used to complement the ambient light that streams into the home.

Camelot Homes is an award-winning firm with over five decades of industry experience. Unlike most of the builders in its area, the firm is a native Arizona builder, now in its third generation of builders. Aside from its luxurious custom modern homes, the firm is also known for its communities. These said neighborhoods adhere to particular themes set for them and best showcases the firm’s excellent command of a variety of architectural themes. Its modern work, however, may best be seen in its portfolio for the “Adero Villas.” In this particular community, the firm often works with homes with large patios complete with spectacular mountain views, beautiful and seamlessly connecting indoor and outdoor spaces, and open great rooms. Some also come with ceilings as high as 12 feet, master kitchens, and spa-like baths. Such is the case for the featured project below.

Camelot has been recognized for excellence numerous times. Its most notable accolades include “Builder of the Year” from the HBA of Central Arizona and several Gold Nugget Awards in various categories including “Home of the Year.” The firm also maintains affiliations with organizations such as the NAHB and it has also been featured in magazines like Ranking Arizona.

Hailed as one of Northwest Arkansas’s premier custom home builders, GB Group Construction is an expert in both modern and craftsman designs. The firm has been in the industry since 2009 and has collaborated with some of the area’s best architects and designers. It is led by founder Jacob Tankersley and he adheres closely to the principle of crafting premier custom homes that are energy-efficient and highly functional. He has overseen and managed the construction of over 150 residential homes over the past two decades. With the aid of his vision, the firm has also been featured in publications like Retrofit Magazine, Northwest Arkansas Citiscapes, and AY Arkansas Lifestyle. The firm is also a Certified Green Professional and maintains affiliations with vital organizations like the US Green Building Council. The firm’s portfolio displays a variety of modern homes that are often distinguished by the firm’s ability to infuse different elements not typically seen in modern designs. We think the project above, is an especially good example. From unique windows and wooden slate exteriors, this home is the incorporation of minimalist art deco elements and modern architecture.

Marmol Radziner uses a design-build approach: the firm handles every phase of construction from start to finish and offers a full range of architecture, construction, landscape, and interior services. Founded in 1989, Marmol Radziner is best known for its innovative designs and excellence in applying construction standards. Given that it provides interior design services, the firm has its very own team of in-house designers and master craftsmen ensuring the high level of personalization that comes with each of its projects. Adhering to the traditional “master builder” process, the firm is currently comprised of over 200 people and takes on not only single-family homes but also restoration, prefab, retail, office, and hospitality projects. Its work has seen the likes of publications such as the Architectural Digest, Elle Decor, and Town & Country. It is also the proud recipient of numerous distinctions, and the project we’ve chosen to showcase here is some of its best work. This home won the firm a Merit Award from the American Institute of Architect (AIA) California’s Design Awards. Located in Los Angeles, this home sits between a canyon road and a hillside somewhere in the Santa Monica Mountains. The firm was tasked with skillfully following the slope of the land, placing the home’s eastern area floating just three feet above the canyon floor. The home was constructed with a façade of brick and metal panels, coupled with large glass windows and entrances.

Headquartered in Carbondale, Koru was founded on a simple principle of crafting innovative designs that have resulted in some of the area’s most distinctive work. The firm has been servicing Colorado since 2005 and has secured a reputation for itself for its excellent modern homes. The firm is led by Antony Cullwick, and the firm has been recognized multiple times, including by the AIA of Colorado. K